In 2017, AGL proposed to build a gas import terminal at Crib Point in Westernport Bay, southeast of Melbourne. Westernport Bay is recognised as a wetland of international importance under the Ramsar Convention. It is home to vulnerable, endangered and critically endangered whales, turtles, fish and waterbirds.

The proposal comprised of gas import jetty works to provide for the continuous mooring of a Floating Storage and Regasification Unit (FSRU). The FSRU would have received liquefied natural gas (LNG) via shipments from interstate or overseas, then convert this LNG back into gas for distribution via a new pipeline running almost 60 kilometres from Crib Point to Pakenham.

The proposed 300-metre-long floating gas terminal off the Mornington Peninsula, would have discharged up to 180 Olympic swimming pools of chlorinated water into Westernport Bay every day.

Our clients were concerned that if this gas import terminal goes ahead, it could irreversibly damage local marine life and help fuel the climate crisis.

In 2018, Environmental Justice Australia lawyers wrote to the project proponents and the Victorian Planning Minister and calling for an Environmental Effects Statement to be undertaken. This was successful and the EES was subsequently prepared.

The environmental assessment for this project generated an unprecedented number of public submissions. More than 6058 submissions are publicly available on the IAC website. The previous record for most submissions to a Victorian EES was the Mornington Safe Harbour project with 2018 submissions. We represented our clients Environment Victoria, Save Westernport and the Victorian National Parks Association throughout the public hearings.

Together with a team of barristers, EJA lawyers made submissions, cross-examined AGL and APA’s experts, and led evidence to make the case that the project is not environmentally acceptable.

At the end of the public hearings, the Inquiry and Advisory Committee produced a written report for the Victorian Planning Minister, Richard Wynne with its conclusions about the acceptability of the environment effects of the project.

On receiving the report, the Minister then made an assessment on whether the environmental effects of the project were acceptable.

A huge win for community, climate and wildlife

This was a huge win for our clients Environment Victoria, Victorian National Parks Association and Save Westernport, as well as the community, who have been campaigning to save Westernport Bay for more than three years, and of course for the precious nature and wildlife that live there.

The Minister’s assessment reflects the overwhelming and sustained opposition from a broad alliance of groups including scientists, residents, tourism and fishing businesses, and our clients. 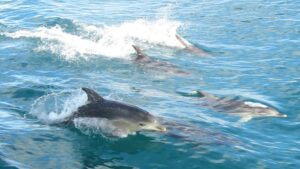