AGL’s Liddell power station has been granted an exemption from NSW air pollution regulations and emits toxic oxides of nitrogen (NOx) at up to 14 times the concentration allowable in the United States, documents obtained under Freedom of Information reveal.

The report obtained under FoI shows AGL Macquarie applied for and was granted an exemption from the NSW Clean Air regulation, allowing Liddell to emit NOx at a concentration of 1400 micrograms per cubic metre (mg/m3).

Power stations of Liddell’s age would normally be subject to the Group 5 NOx limit of 800 mg/m3. 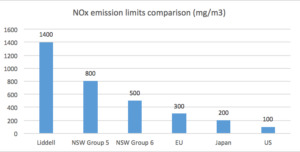 “Liddell is licenced to emit toxic pollution at levels that should see it subject to serious enforcement actions.”

“Toxic NOx emissions from Liddell could be reduced by more than 90%, significantly improving community health in the Hunter Valley, but generators appear unwilling to invest in these emission controls, especially for older power plants.”

See also: EJA report Toxic and Terminal on problems with power stations and their pollution licences