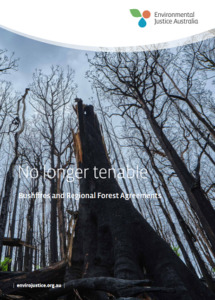 Regional Forest Agreements are intergovernmental agreements between the Commonwealth and the Western Australian, Tasmanian, New South Wales and Victorian governments. These agreements attempt to resolve competing demands on native forests for resource extraction and industry certainty on one hand, and conservation on the other.

Conservation provisions of RFAs are underpinned by regional systems of what were claimed to be Comprehensive, Adequate and Representative (CAR) reserves. They comprise formal and informal reserves and prescriptions to protect the environment in forests where logging is permitted. Even before the fires, RFAs were failing to protect wildlife threatened by logging and to secure environmental values more broadly.

This summer’s bushfires were unprecedented in scale, intensity and severity. Their impacts on forests and wildlife have been catastrophic. The CAR reserves have been severely affected with over three million hectares of dedicated parks and reserves burned. This must be met with a shift in policies, prescriptions and other protections of forests available for logging, including RFAs.

The fires, particularly through their impacts on the CAR reserves, have destroyed the policy foundations of the RFA system, rendering it untenable. Governments have so far failed to respond to the changed circumstances, continuing instead to operate on a ‘business as usual’ basis.

The consequences of the fires and the impact on CAR reserves also raise legal issues in relation to whether the agreements continue to be binding, whether RFAs are legally valid, and whether exemptions to the Environment Protection and Biodiversity Act 1999 founded on RFAs continue to apply.

RFAs today are legally uncertain and failing in practice. Their problems cannot be fixed within the RFA framework because the agreements are predicated on gradual change, not catastrophic events. They contain no mechanism for comprehensively altering the terms of the agreement to reset the balance between conservation and production, made necessary by the fires.

To protect Australia’s unique forests and wildlife in the face of more frequent and intense bushfires, governments must throw out RFAs and put an end to logging native forests.