Media reports suggest Energy Minister Angus Taylor is deliberating whether the government should provide the $300 million required to keep the ageing station open an additional three years, or if it could purchase it directly from AGL.

Lawyers from Environmental Justice Australia have pointed out that plans to keep the power station open fail to recognise the health impacts and loss of life from exposure to toxic air pollution caused by the power station.

Using research from a study they commissioned in 2018 by leading epidemiologist and member of Doctors for the Environment, Dr Ben Ewald, lawyers from Environmental Justice Australia have calculated that toxic air pollution from Liddell power station would cause an additional 41 premature deaths in the three years it is proposed to stay open.1

According to their research, the proposed extension would also cause an additional 33 low-birthweight babies and 51 additional cases of type 2 diabetes from exposure to pollutants like sulfur dioxide and nitrogen dioxide.

“Not only is Angus Taylor wanting taxpayers to spend millions extending one of Australia’s most inefficient and toxic old power stations – he is asking them to invest in an additional 41 premature deaths from exposure to toxic coal pollution.

“Saving taxpayers $300 million is an obvious reason for shredding this ridiculous plan but preventing more people from dying prematurely from serious illnesses like stroke, cancer and heart disease, is a compelling enough reason on its own.

“The health bill from air pollution costs Australians more than 4000 lives and $24 billion a year. Energy Minister Angus Taylor should stop trying to find ways to keep this ageing and inefficient power station open and put the health of the community first.

“Liddell is licenced to emit toxic pollution at levels that should see it close as soon as possible. Closing this toxic and inefficient coal-fired power station would lead to immediate health benefits for surrounding communities who are already exposed to high air pollution levels from coal mines, coal-fired power and bushfires,” Ms Rivers concluded.

AGL gave five years notice that it planned to close the plant by 2023 but Energy Minister Angus Taylor lobbied to keep the station open until 2026, setting up the Liddell Taskforce to investigate extending operations. AGL has said it will not provide funds to extend the life of the plant to 2026.

Liddell is 48 years old, is highly polluting and has been plagued with operating problems. Liddell is already allowed to emit toxic nitrogen dioxide at up to 14 times the concentration allowed in the United States and almost twice the concentration limit permitted for other NSW power stations of Liddell’s age.2

NSW’s five power stations collectively cause 279 deaths in NSW each year, due to uncontrolled air pollution.

Modern pollution controls that would reduce toxic pollutants like nitrogen dioxide by more than 85 percent have been mandatory for coal-fired power stations in the US for almost 20 years but are not required in Australia.

(See for e.g. this USEPA report for details.) 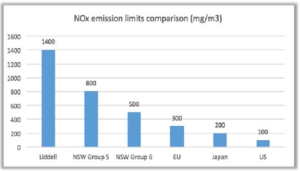